Sharon Buss, President of End-Time Handmaidens Inc., has served at the headquarters in Engeltal since 1977, where she has been mentored and trained by the late Dr. Gwen Shaw, founder of the End-Time Handmaidens, for “such a time as this.” Sharon has a passion for the Presence of God and endeavors to cultivate it wherever she goes. She has traveled extensively throughout the world ministering God’s Word and leading His people into worship. Sharon has a mandate from the Lord to help people connect with His Land by bringing them to Israel, where the Bible comes alive to them. This is a new day and a new era. This generation of End-Time Handmaidens will continue to build on the foundation laid down by Gwen Shaw. Standing on that foundation, Sharon is more than qualified and ready to lead the End-Time Handmaidens to even greater heights. She is a gifted musician, teacher, preacher and administrator. Her vision for revival in the nations and bringing in the final end-time harvest should encourage us all to be equipped, prepared and ready to “just obey God.” Sharon has written two books: her life story, Take the Lid Off, and a devotional, In Quietness and Confidence, Keys to Overcoming.

Sharon was born in India of missionary parents and was raised in Michigan. As a senior in high school, she was expecting to enter Western Michigan University School of Music to prepare for a career in music, when God stirred her heart to follow Him into full-time commitment as an End-Time Handmaiden. After attending Kingsway Missionary Institute, a Spanish language school in McAllen, Texas, she moved to Engeltal to serve on the End-Time Handmaidens headquarters staff in 1977. She has spent the ensuing years learning many of the facets of serving God. Sharon became the Vice President of the ministry in 2006, when Sister Gwen’s beloved husband, Lt. Col. James von Doornum Shaw, U.S.A.F., Ret., who held that office, passed away. Then when Sister Gwen passed away January 13, 2013, Sharon became the President of End-Time Handmaidens and Servants International. 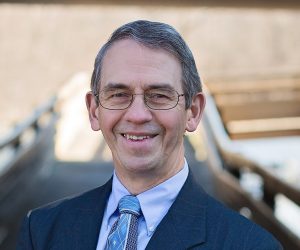 Philip Buss, Vice President of End-Time Handmaidens and Servants, was born and raised in Chicago as a part of a very musical family. He attended the Chicago Conservatory of Music and plays the clarinet and classical guitar. Philip renewed his commitment to the Lord in 1981 and received the Lord’s call into the ministry, becoming a part of the Engeltal Staff that year. He is a songwriter and anointed musician as well the manager of the printing for Engeltal Press, the publishing ministry of the End-Time Handmaidens. He is also responsible for the ministry’s vehicles. He has served on the Board of Directors since 1988. Philip and Sharon were married in July of 1981 and have served in many nations with Sister Gwen Shaw as a support team, doing the background work for meetings, leading worship and singing the songs the Lord gives them. In 1993 and 2000 they led teams of intercessors into the Himalayan nations of Nepal and Tibet to redeem the land and pray for God to pour out His Spirit there. They lead a prayer tour to Israel annually. They also minister in the Word of God. They have two highly anointed tapes: Rend the Heavens, a recording of some of their original songs and End-Time Handmaidens and Servants Choruses, a recording of 60 songs and choruses written by Gwen Shaw, Dorothy Buss and several by Philip and Sharon. In 2008, they released a CD called Giving Holy Praise. About half of the songs on it are classical/sacred in style and the other half are their own compositions. They joined Claren McQueen in making a beautiful worship CD called Resting Place in 2011. Philip and Sharon have one daughter, who lives in Engeltal with her husband and three children.

Sister Gwen imparting her anointing to Sharon and Philip

Photos of Sharon and Philip